This is the second segment of our new blog post series, “Brain Injury Basics”, written and researched by neuroscientist, Kamal Narayana. Kamal is a graduate student in the Division of Medical Sciences at UVic.

With the weather cooling down and holidays just around the corner, family and friends will be coming together in a living room setting next to a fire to fill in on what has been happening in their lives. Bright lights and fireworks will take over the streets and peoples’ yards as the world will celebrate a new year. On the outside, this can be enjoyable but to brain injury survivors, these events can be uncomfortable, distracting and exhausting – a post-injury change known as sensory overload, or hypersensitivity.

What is hypersensitivity, or sensory overload?

A quick step back; acquired brain injury is one of the world’s leading causes of reduced quality of life and disability. This can be traumatic (i.e. traumatic brain injury (TBI)) or non-traumatic (i.e. stroke and brain tumor), and in both cases result in long-term impairments and socio-economic and -emotional burden. The lesser well-known cousin of these consequences is sensory sensitivity. This can take the form of hyposensitivity or hypersensitivity; the former being an underwhelming response to stimuli or event, whereas the latter is an overwhelming response to stimuli. Hypersensitivity, the more common, can occur across various modalities such as visual, auditory, gustatory (smell) and even tactile such as touch. Of these sensory modalities, light (visual) and auditory dominate the hypersensitivity spectrum response. This means that everyday events can become uncomfortable, eventually leading to stress and anxiety and ultimately prolonging recovery. Sounds that were bearable can become alarming; crowds can feel overwhelming; and bright light can cause headaches and potential nausea.

Previous research has pointed to several neuronal changes post-injury in relation to hypersensitivity. For instance, brain injury induces abnormal sensory processing within specific brain regions involved in ‘filtering-out’ various stimuli, and interestingly in the emotion and fear processing center, but we’ll get back to this. There are also attentional impairments, in particular the information processing speed and selective attention is reduced, and predictive processing such as knowing the direction in which a car will turn or whether an object is about to fall depending on its orientation. Neuroscientist’s also proposed abnormalities within large-scale brain networks such as the default mode network, which is active when a person is not focused on the outside world; common during daydreaming and mind-wandering.

Going back to the impacted brain regions, there is a lot of research showing neural changes within the thalamus and limbic structures. The thalamus is a crucial part of our brain as every information we absorb whether it be visual or touch must pass through it before we produce an action. There are two general accepted theories behind an

abnormal circuitry within the thalamus: damage of arteries and increased sensitization between neurons. The first is a little less complicated – arteries supply oxygen and nutrients to various parts of the body, and thus, when damaged, the supply chain is disrupted leading to the described abnormal processing and prolonged recovery.

The second theory is complex as there are various factors involved in the signal sensitization circuitry. When we use the term sensitization, what we mean in the context of hypersensitivity is that the circuit involved in our sensory perception is much more ‘sensitive’ to an event. For example, when we hit our shin, the neurons involved in pain sensation will release a chemical called glutamate which will excite an adjacent neuron sending signals to the thalamus for painful sensation. If this circuit becomes ‘sensitive’, a hit on the shin will almost quadruple the amount of glutamate release, which in turn quadruples the painful sensation. The inconsistent release of such molecules and hormones, and the overstimulation of immune cells all play a role in this thalamic sensitization. There are also various protein molecules and genetic factors that tie into this complex mechanism, all of which are intensely researched for various disorders and diseases.

The amygdala, the emotion and fear center of our brain, is a fascinating region as there is still very little that we know about its processes and limits. There have been several studies that looked into the heightened emotional response to everyday stimuli, which followed a similar mechanism to the thalamic sensitization.

The key takeaway from this is that hypersensitivity is not localized to one region of the brain. In fact, this overstimulation observed across the brain is another accepted theory to hypersensitivity – the activation of various regions at one time point, or event. Studies have shown that regions of the brain that are normally inactive during activity are heightened, and even propagate signals to higher cortical layers, which can induce headaches.

What are some triggers to hypersensitivity?

As discussed, lifestyle risks play a significant role in stroke, and thus prevention is key. The Canada Heart and Stroke Foundation points out six main lifestyle changes that reduce the risk of stroke, which are: healthy diet, physical activity, healthy weight, stress levels, alcohol abuse and smoking. Importantly, it is knowing whether you are in the high-risk group because even the small favorable changes could lead to major reductions in stroke incidence. Another important consideration is preventing subsequent stroke events, and in the case of both ischemic and hemorrhagic stroke, appropriate control of blood pressure is important for secondary prevention.

These are general sensory modalities that are common triggers for brain injury survivors, but not exclusive. Every individuals’ sensory perception varies, and thus it is important to ask and make an effort to reduce this stimulation.

As mentioned, every individuals’ perception differs, and so will their experience and reaction to sensory overload. In fact, those who are experiencing symptoms of overstimulation are often shunned for being irresponsive and rude. But it’s important to keep in mind that the complex nature of hypersensitivity places the individual into a “fight-or-”flight” response, our body’s defense mechanism, in an event that may seem regular to the average person. As a result, it’s important to be on the lookout for social queues (or symptoms) of sensory overload, which include:

The most important takeaway from this long post is that if you are a family member or friend of a brain injury survivor, the best thing you can do is be supportive. Ask your loved one about their triggers and make efforts to create an environment in which they are comfortable and not overwhelmed. And always be understanding, especially during the holidays and the new year.

Following up on our previous post, we would like to provide some tips and strategies to minimize sensory overload in social events or during the upcoming holidays.

1. Get plenty of rest – although this may seem like a no brainer, it is important to plan ahead. If a social event is nearby, try to take a nap before so that you are refreshed.

2. Communicate – let those around you, family and friends know of a triggering stimulus, or when you have a headache or feel nauseous.

3. Avoid crowds – instead of abruptly distancing yourself from crowds, try to walk in less congested areas, or situate yourself in an environment where you can see a safe place that you direct yourself too. It can also help to be with a trusted friend or family member that can guide you if things go out of control.

4. Stay hydrated – this will keep you functioning throughout the day and can give you a necessary refreshment break.

7. Regular breaks – taking breaks can recharge your brain and make you feel more refreshed. Every hour or so, take a look out your window for some fresh air, a short nap, watering plants, or even sitting down and focusing on breathing.

8. Knowing your exits – plan ahead in case there is a sudden crowd, know where the nearest exit doors are, or your safe space whether it be near a tree or in a

corner. Also, try not to stay at these places for too long, and make sure to rest right after.

9. Blocking the sounds – earplugs or earphones are a great way to block out any loud noises, but be safe when walking near traffic as it can block potential safety sounds.

10. Eat simple foods – unusual texture and spicy food can trigger sensory overload, and thus, try to stick with known foods, or slowly introduce yourself to such spicy flavors but do so with caution and limits.

11. Monitor your feelings – this is the best way to learn about yourself and what potential stimuli can trigger you. Write down what you were feeling after a trigger, reflect on it, and try to either avoid it or make ways to work with it. 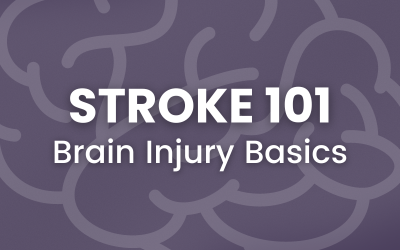 This is the first segment of our new blog series, “Brain Injury Basics”, written & researched by UVic neuroscientist, Kamal Narayana.